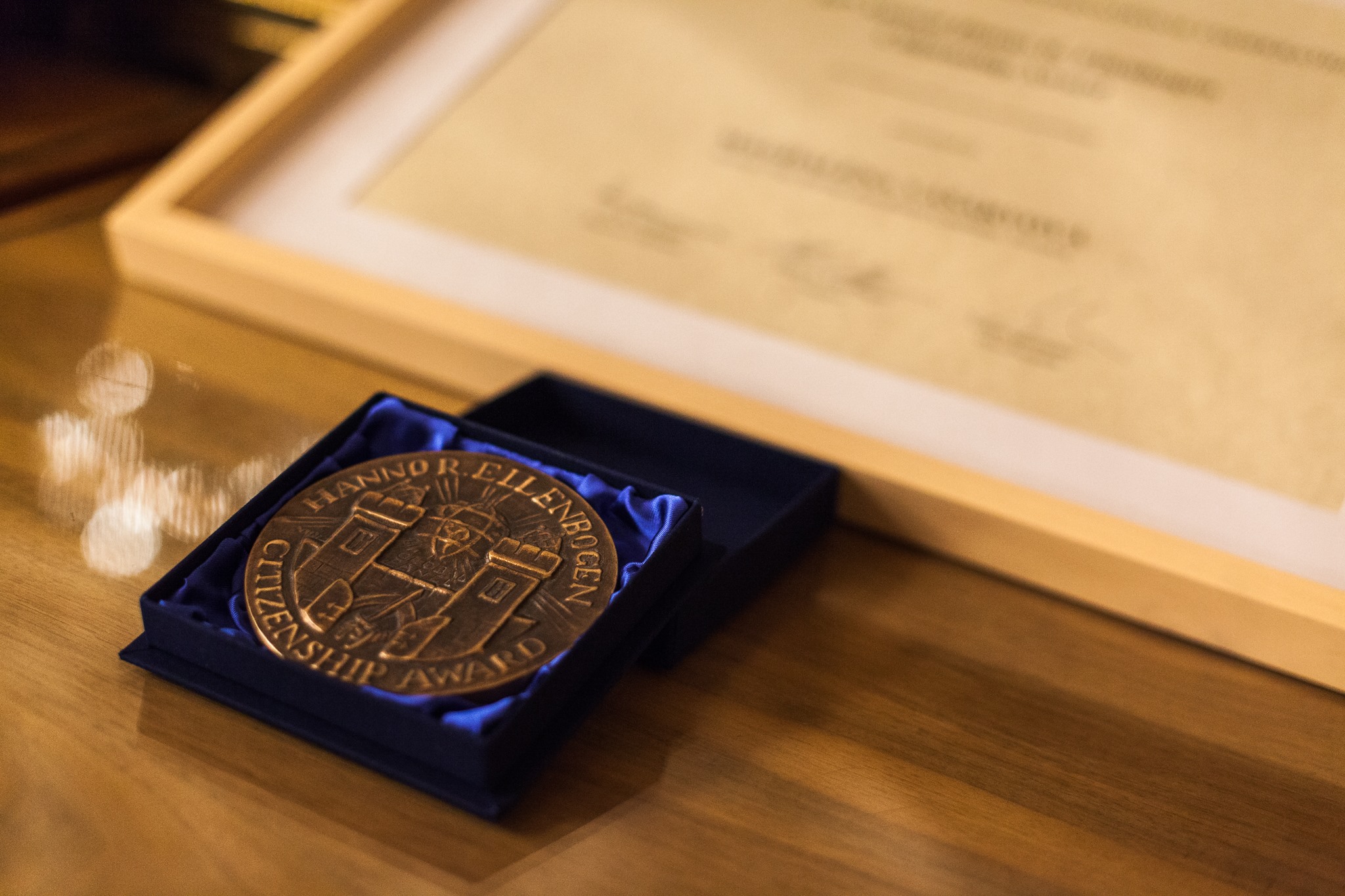 The Hanno R. Ellenbogen Citizenship Award is named to honor a woman who grew up in post-war Germany. The years spent in a divided Europe instilled in her a firm belief in positive action. Her commitment to ideals of public service and the common good helped to break down the barriers which divide people from people in their shared destiny.

“This Award is about courage – the courage to change, to stand against mediocrity – to think beyond parameters. Each of these recipients has shown that courage” – words by Marc S. Ellenbogen, the President of the Prague Society and Chairman of the Global Panel Foundation.

Every year the Prague Society presents the Hanno R. Ellenbogen Citizenship Award. The award honors dedication to and achievement in public service, particularly in Central and Eastern Europe. Traditionally the recipient of the award donates the award’s financial prize to a young person of his or her choice.

The HRE Award is presented in partnership with the Global Panel Foundation. It has been awarded annually since 2000 – with the only exception of 2012 when no recipient was named.

The recipients of the HRE are:

Zdenek Tuma: joined the European Bank for Reconstruction and Development in 1998 and has held the position of governor in the Czech National Bank. He is a member of the Czech Economic Society.

Magda Vasaryova chose the first women’s association Zivena as the recipient of her financial prize. Zdenek Tuma presented his financial award to the Czech badminton player and cancer-survivor Petr Koukal.

Tony Fitzjohn OBE is a British conservationist living in Tanzania. Involved in the establishment of the Mkomazi national park; provision of clean running water and flying doctor service to local communities.

Souad Mekhennet (born in Germany of a Turkish mother and a Moroccan father): unbiased journalist for the Washington Post Newspaper, German TV channel ZDF and Daily Best. Following the 9/11 attacks, she reported about radical Islamic movements.

The financial prize recipient was Arthur Sniegon, a young Czech student and conservationist whose efforts to save lives of wild animals in Africa earned him this award. Souad Mekhennet chose two organisations as recipients of the financial prize, Praunheimer Werkstätten and the Die Weisser Ring.

Iva Drápalová: dissident and opposition activist.  Following the crushing of the Prague Spring, she worked for and later became Associated Press’s Prague correspondent. After she retired, she became a translator at Velvet Revolution press conferences.

Věra Čáslavská: Olympic medalist, was forced into retirement and denied the right to travel, work and attend sporting events following her protest against the Soviet-led occupation of Czechoslovakia in 1968.

The financial prize recipient was Štěpán Ripka, a social researcher and policy analyst.

Andrés Pastrana: President of Colombia from 1998 to2002. He dedicated his life to fighting corruption and the Colombian drug trade that lies at the root of the country’s civil war. As President, he was determined to solve the armed conflict peacefully.

Gen. Wesley Clark was the Supreme Allied Commander of NATO, proactive in the NATO membership for Hungary, Poland and the Czech Republic. He was the first NATO commander to visit Prague after the fall of Communism and played a pivotal role in bringing peace to Kosovo. Clark was also a US Presidential candidate in 2004.

Jiří Dienstbier: became a signatory of Charta 77, helped restart one of the Czechoslovakia’s major newspapers and he later became the first Foreign Minister of post-Communist Czechoslovakia in 1989.

The financial prize of the award was donated to fund the design and publishing of a book “Jiří Dienstbier – rozhlasový zpravodaj.”

Adam Michnik is the editor-in-chief of Gazeta Wyborcza, the largest and the first independent news daily in Poland after the fall of Communism. A historian, co-founder of KOR (Committee for the Defence of Workers) and a prominent Solidarity activist, he was detained many times and finally imprisoned for a total of six years for activities opposing the communist regime.

The financial prize of the award went to two young journalists at the Polish daily Gazeta Wyborcza, Juliusz Kurkiewicz and Aleksandra Klich-Siewiorek.

The 14th Dalai Lama, Tenzin Gyatso, the head of state and the spiritual leader of Tibet. Awarded the Nobel Peace Prize for his non-violent struggle for the liberation of Tibet.

The financial prize recipient was the Slovak charity Dobrý anjel,  which helps families of children suffering from cancer or other insidious diseases.

Desmond Mullan, was one of the Prague Society’s main supporters, Vice-Chairman of the British Chamber of Commerce, a supporter of the International School of Prague, and an active member of the congregation of the Roman Catholic Church of St Thomas in Mala Strana.

Alaksandar Milinkevich entered national politics after the fall of the Soviet Union, becoming chief of staff  to one of the opposition leaders. In 2005, he was chosen by the United Democratic Forces of Belarus as joint candidate of the opposition in the presidential elections of 2006, to stand against the totalitarian Alexander Lukashenko.

His Majesty King Michael I was deposed by the Communists, stripped of his citizenship, and banished from his country in 1947. Never forgetting his people, over the next fifty-five years he worked as a mechanic, commercial pilot and businessman. In 1997, he said in an interview “The King is head of state but he is also the first servant of the people. Never forget that”.

The financial prize recipient was Petrisor Ostafie, a student of Medical Bio-engineering in Iasi. He was a members of the Board of the Alaturi de Voi Romania Foundation and brought hope t many young people living with HIV

Miloš Forman lost both his parents in the Nazi death camps. After studying in Prague he made his first feature film in 1963: “Black Peter”. He gained international recognition with “Loves of a Blonde”. His next film, “The Firemen’s Ball”, attracted the attention of the Communist authorities and was banned. After the Soviet invasion of 1968, Forman settled in America, winning international fame with “One Flew Over the Cuckoo’s Nest”.

The financial prize was divided into three parts in order to provide scholarships for students of the Film Academy of Miroslav Ondříček in Pisek.

Lord Robertson, British politician, past Defence Secretary and Secretary General of NATO. For seven years, he was on the Council of the Royal Institute of International Affairs (where he now serves as Joint President). He was appointed a member of Her Majesty Queen Elizabeth’s Privy Council in May 1997.

The financial prize recipient was David Hodan, who wrote an essay named “What I would do if I were General Secretary of NATO”. This ambition young student caught Lord Ellen’s attention by his courage, his ambitions and his dreams.

Václav Havel: Czech playwriter, intellectual and participant in the Prague Spring. A spokesman for Charta 77, and a member of the Committee for the Defence of the Unjustly Prosecuted. Imprisoned, opposition leader and finally following the Velvet Revolution of 1989, he was elected the first President of a free Czechoslovakia.

The financial prize recipient was Andrej Dynko, the editor-in-chief of the independent Belarusian newspaper Nasha Niva.

Madeleine K. Albright served as Secretary of State of the United States and the US Permanent Representative to the UN from 1993 to 1997. She reinforced America’s alliances and advocated democracy and human rights.

The financial prize recipient was Petra Procházková, a Czech journalist and humanitarian worker, best known as a war correspondent to conflict areas of the former Soviet Union.

Sir Charles Mackerras:  American-born Australian with a true passion for music during his entire life, musician and conductor, was honoured with many awards throughout his life. A fervent supporter of Czech music.

Ken-Ichiro Kobayashi: Japanese conductor and composer of international repute, one time leader and guest conductor of the Czech philharmonic orchestra.

The financial prize recipient was Lukas Vondracek, a young talented musician who made his debut with the Czech Philharmonic Orchestra in 2002 with concerts all over the world.