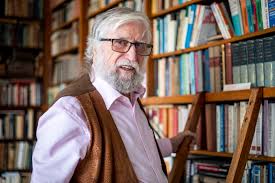 To say I am pained at the death of Ivan Havel – a hero, a scientist, a Zeitgeist and my friend – doesn’t begin to cover it. He was one of the first dissidents I developed a close rapport with – during, and mostly after – the fall of Communism.

Ivan was the part of the iceberg under the waterline. The 95% that holds up the top. Courageous. Thoughtful. Unselfish. Giving. A supporter of the people. A quiet fighter against a completely evil regime.

He despised public life. So he dedicated himself to science – to young scientists – and set up the Center for Theoretical Studies (CTS) with Ivan Chvatik – another great dissident in his own right.

His brother Vaclav Havel would become the first non-Communist president of Czechoslovakia.

Ivan M. Havel was the recipient of the 20th Hanno R. Ellenbogen Citizenship Award along with Ivan Chvatik in 2019.  A joint Award given to both him, and for Germany – Hans-Dietrich Genscher, the former Foreign Minister, and Markus Meckel, the former priest-become-politician and the last – and only – democratic Foreign Minister of East Germany.

I will – we will – always stand with you Ivan – and of course Daša too.